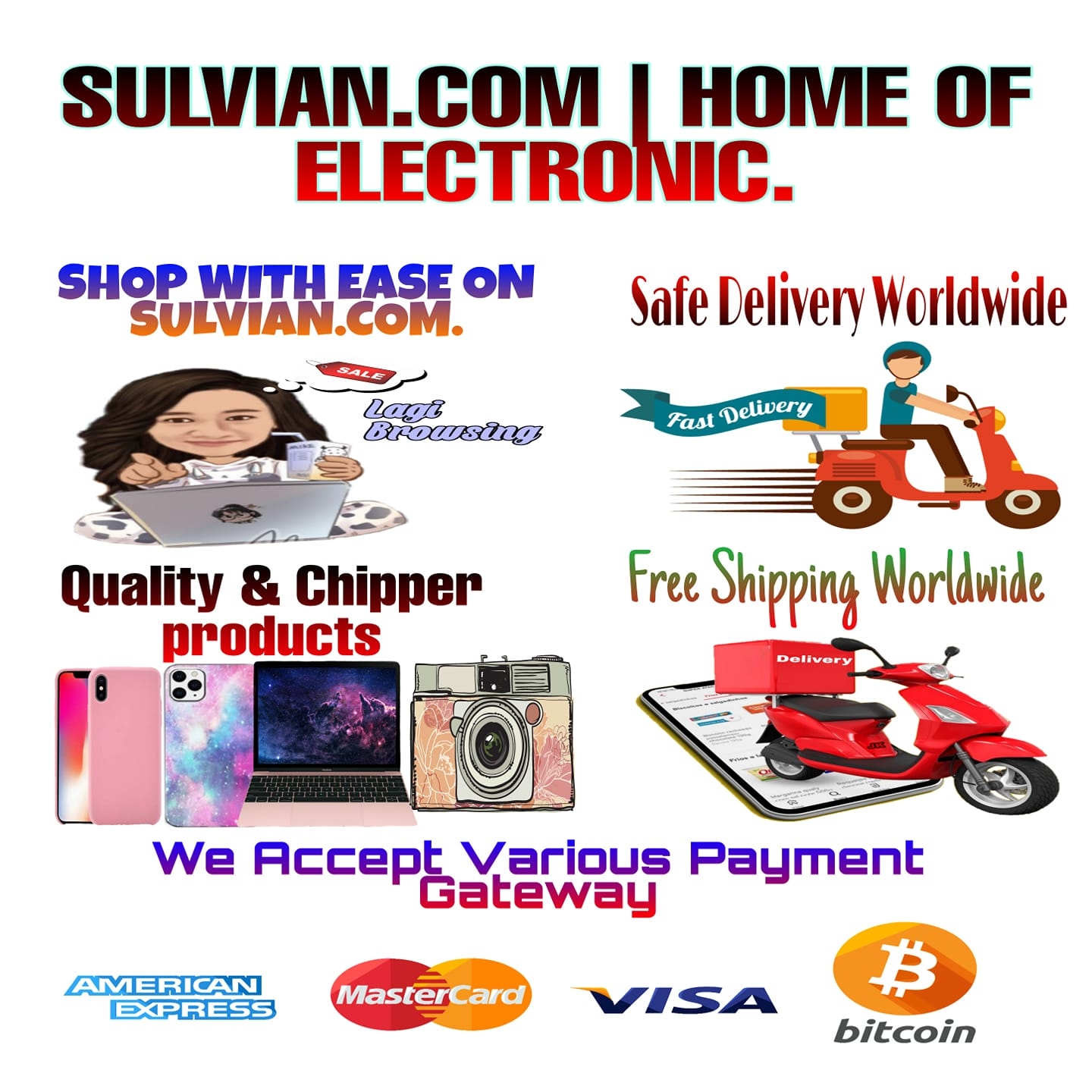 #BBNaija Day 23 was entertaining. Here are today’s highlights – the brewing love between Brighto and Dorathy, the hottest fight, drama in the house, and lots more

Not only do the Housemates turn to 5 Star restaurant chefs when it’s time to making breakfasts, but they have also made it a habit to do it in groups or pairs. The Housemates were seen gathered in the kitchen after their morning workout session and cleanup duty cooking up a storm. Each group or pair next to each other beaming with smiles as they cooked and waited for their meals to be ready.

Ozo and Nengi painted an adorable picture as they paired up to make breakfast this morning. Each offering a hand as they made their breakfast of fried plantain and eggs. They may not have fully defined what they both have going, but they sure make interesting breakfast buddies.

The crew that cooks together

It’s always a thrill when friends come together to turn up at the stove and that’s what Brighto, Wathoni and Trikytee did as they made their breakfast with occasional jibes at each other making it look like a scene from a fun cooking show.

First, we thought it was games night, but apparently, nothing bonds the Housemate better than time spent making food. There’s a sense of harmony and positive vibes. Food really does gladden the heart.

Who else didn’t see this coming? Let’s look into what seems like a possible ship between Dorathy and Brighto in the Lockdown House.

Dorathy and Lucy served some hot tea in Biggie’s Garden this morning; from Brighto’s love advances to Ozo and Nengi’s situationship, they gave us premium Lockdown gist as e dey hot.

Dorathy served some hot tea in Biggie’s Garden this morning with regards to Brighto’s supposed feelings for her.

READ MORE :   Hermes has emerged as the Big Brother Naija head of house for week 2

Our resident counsellor is in love?

Dorathy opened the gist tap by telling Lucy what transpired at the Saturday Night Party with Brighto. Remember when Ebuka scattered all the tables on Sunday, well Brighto was asked on his opinion about the Dorathy, Ozo and Nengi entanglement, to which he affirmed that it was a triangle and also claimed that Dorathy has some feelings for Ozo. Of course, Dorathy was triggered by his response, especially seeing that she has tried to make it clear that she has no feelings for Ozo, outside of casual friendship.

While we kept wondering why Brighto felt the need to go apologize to Dorathy for stating his opinion to Ebuka, Dorathy confirmed the reason in her conversation with Lucy. According to her, she and Brighto had a moment at the party where she told him, “I feel like kissing you.” To which Brighto replied asking where that was coming from and she said she doesn’t know.

The gist then leaned towards the Ozo/Dorathy/Nengi triangle and Lucy said that Dorathy should remove herself from the equation. She said this was what caused the fight between herself and Lucy until it became more personal and she said she wondered why Nengi would think she didn’t have the courage to say anything to her face. “Her new target was Evicted on Sunday and she was looking for the next move. I only feel bad for Prince because he was falling and he’s my friend,” she said.

“I just think she brought up that fight after I was done shouting, but she picked you as a target because she was trying to get at me but couldn’t talk to me directly,” Dorathy said to Lucy. “Ozo has already said he’s now physically attracted to her though,” she continued. Lucy replied saying it’s not that she’s upset that many guys are following her, but she just isn’t comfortable with the way Nengi was playing Ozo and the others in the House. “You can still be friends with someone and not be cozy with the person, but if you claim you’re just friends but you’re cuddling and being cozy, then you’re leading the person on,” she exclaimed.

Seeing that Dorathy didn’t entertain Lucy’s gist on Nengi and Ozo, we wonder if the fight between Lucy and Nengi was as a result of the built-up tension between the two or there’s a hidden beef which will still brew more fights in the House, as long as the triangle is mentioned.

Dorathy and Lucy briefly talked about the new Head of House and her Deputy. While Dorathy called it a cruise regime, Lucy replied saying, “this one na cruise to losing Wager regime o.” They both then talked about why it was taking the resident leaders a long time to call the House to order for Wager rehearsals.

Is it safe to say that where Dorathy and Lucy are gathered, Lockdown revelations and piping hot tea will be served? 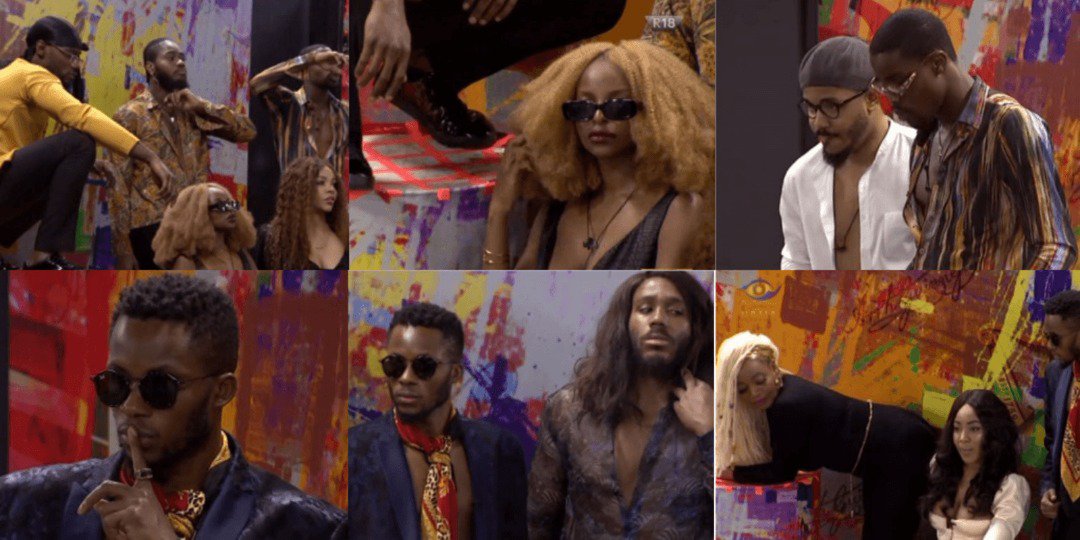 The Housemates showed us what they got as they served looks for the Guinness Smooth Photo Challenge.

It was all about style, elegance and model-like poses as the Housemates pulled out all the stops to deliver a stunning photoshoot for the Guinness Smooth Photo Challenge. The Task required that they execute a creative photoshoot with a stylish theme.

To get it started, the Housemates had to first divide themselves into two different groups called Team Hops and Team Barley by picking cards from the box.

Here are the teams they fell in. 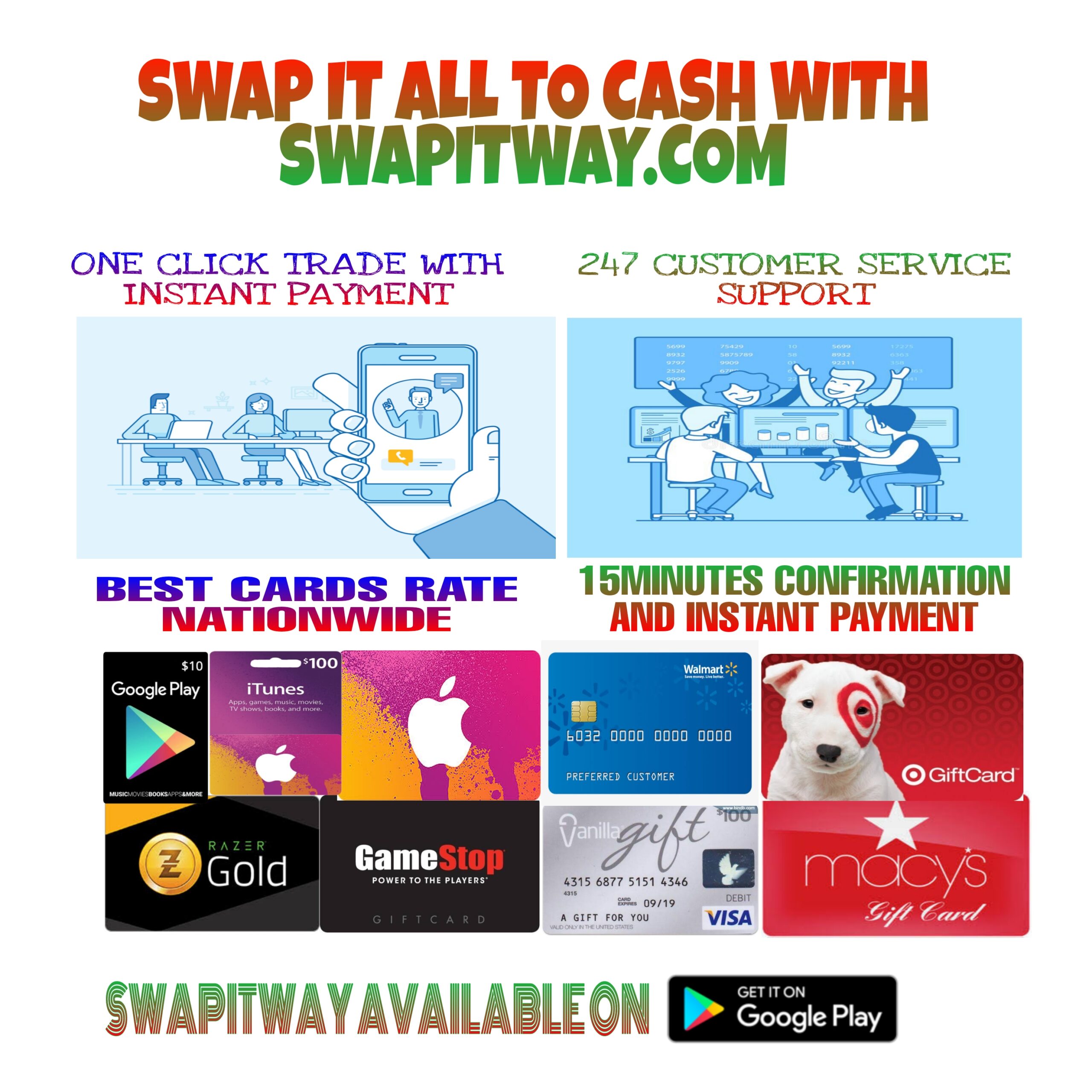 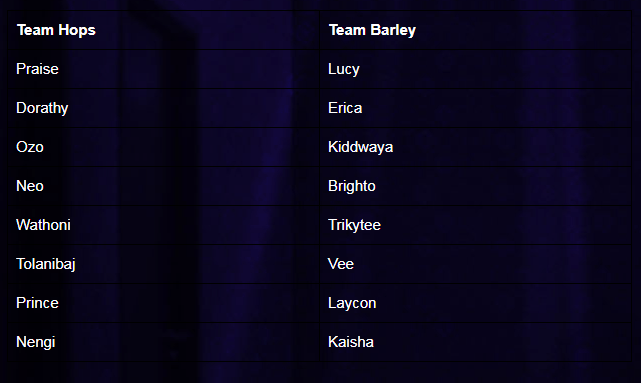 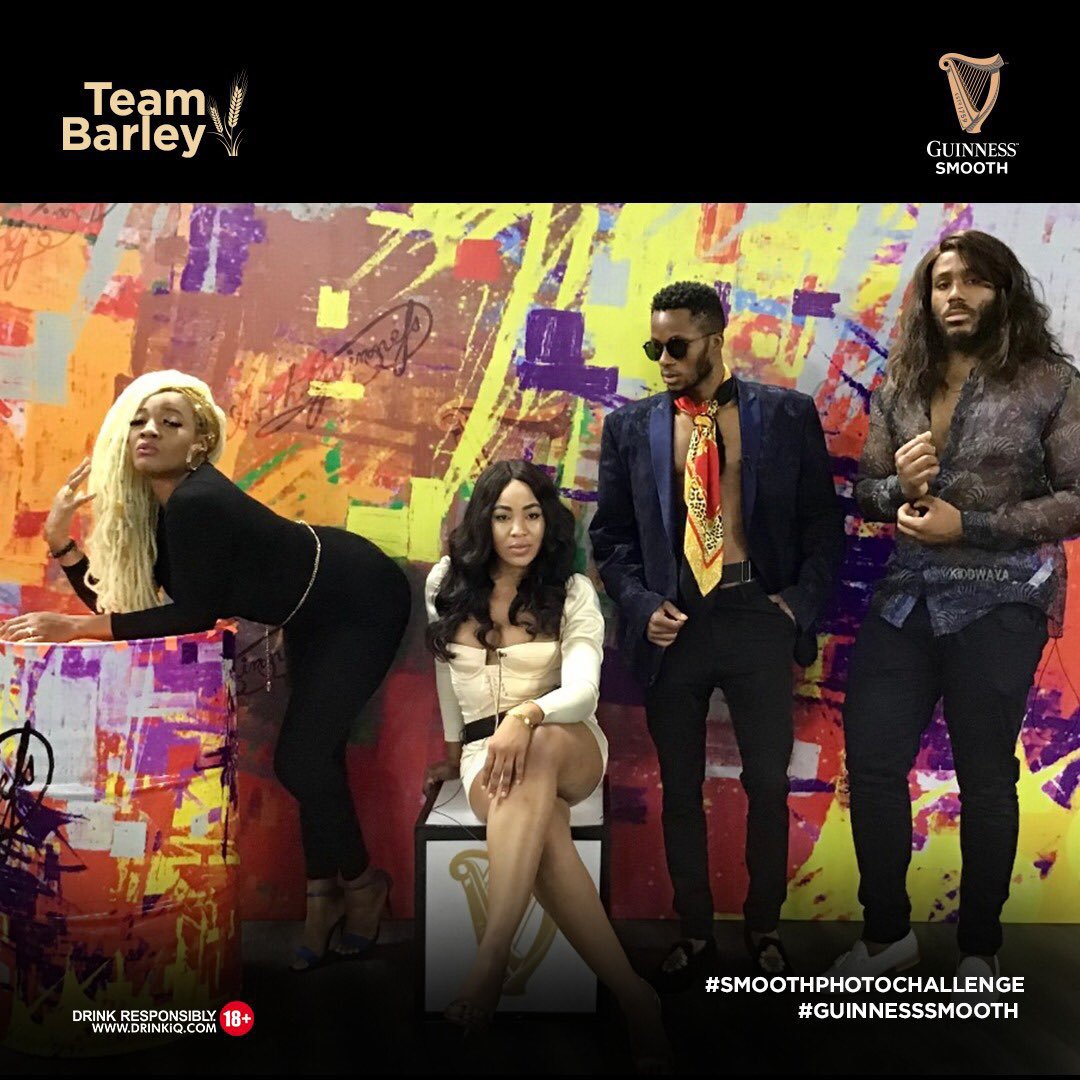 Although the Challenge was called Smooth, Team Barley didn’t exactly start off on a smooth note as Lucy complained about not being informed before the brief for the Task was read. She had earlier gone to the restroom only to step out to find out that a Brief had been read and she missed out on it. Something she didn’t take kindly to it. To ease the situation, Erica personally read the Brief to her, but that didn’t do much as it still almost turned into a major argument between Lucy and Kiddwaya as she brought it up again. That soon ended and they focused on the vintage style they were going with for the photoshoot.

Team Hops had Dorathy in charge and she was quick to show why Ozo made her his Deputy HoH. She wasn’t alone, she had Tolanibaj assisting her. Taking the bull by the horns, she immediately outlined the roles for each teammate. It wasn’t long after they settled for a blend of styles for the photoshoot.

Having picked out their theme for the creative shoot, off they went to the Arena to serve looks in a bid to win the Smooth Photo Challenge. Both Teams took turns giving their very best and striking the meanest poses for the photoshoot. From fashion magazines cover-worthy poses to runway poses, the Housemates did their thing and made serving fierce looks look like light work.

This was just the first round of the Guinness Challenge for the day, they still had more to go to eventually decide who the winner was. For this Smooth Photo Challenge though, we were very impressed with the effort they put up. May the best team win.

After the Head of House Games were done, the game of survival continued.

There is never a dull day inside the Big Brother Naija House, and last night was an especially interesting evening. ,

After securing a fantastic Head of House win, Erica was left with a difficult decision as to who she would select as her Deputy. In the break between the end of the game and the Diary Session where she would have to reveal her choice, she was seen agonising over the choice. Erica even took time to consult with one her possible choices, Laycon, about the difficult decision.

When Biggie summoned her to the Diary Room to hear her selection, Erica wasted no time in selecting Kiddwaya as her Deputy and choosing Laycon as a replacement, should Kiddwaya decline. Kiddwaya didn’t decline the honour of becoming her Deputy and struggled to hide his joy when Biggie announced it. It was especially sweet, after having been fined their entire Betway Wallet at the beginning of the game for whispering during the Live Show.

Once again Brighto managed to get a truth that a Housemate had been keeping to themselves. This time around it was Dortahy and she shared her previous experience with triangles and how she feels about them now. If getting the truth quickly ever needed a spokesperson, Brighto would be a perfect choice.

The Housemates also got a chance to practice their non-verbal communication when playing a game of Charades. It was surprising to see how in tune they have become, as all the questions were answered in quick succession. It seems as if the Housemates are getting to know each other well.

The surprise of the evening was Kaisha who had a thrilling conversation with herself on the bed outside. Of all the interactions she has enjoyed in Biggie’s House, the one with herself seems to be the one she enjoys the most.

The only thing guaranteed in the Big Brother Naija House is that each day will be more interesting than the day before. Don’t miss a single one if you want to stay updated on all things Big Brother Naija Lockdown.

The Lockdown Housemates are on a quest to win another Wager Task and the focus this time, is on sensitizing the public on gender violence and rape.

The Housemates are given various creative Tasks to perform as Team Hops and Team Barley.

Wathoni and Trikytee discuss Tochi’s Eviction and all the table shaking moments Ebuka served the Lockdown House on Sunday.